Today, we take pause to admire women and men who have bravely fought breast cancer and won. There is a current controversy on Facebook regarding women posting photos of their bodies post mastectomy. This article discusses how it now appears that the ban on sharing these photos and stories about breast cancer and mastectomies is lifted. The woman in this photo did not initially intend to have her photo circulated, but she has become a symbol for the cause.

It is an honor to support these women and their families who are proud to have faced cancer with the most extreme of measures and are comfortable displaying their victory. It takes great courage to stand up after such a drastic procedure and difficult journey and show the world your inner warrior. Knowing several people close to me in my life  who have battled breast cancer, I’d like to add a special admiration for their struggle and all that they have to done to regain their health using their courage and inner beauty. I encourage you applaud the people in your life who have risen above adversity and let them know how proud you are of them. May this article give you hope, inspiration and true strength for whatever you may find challenging today and throughout your life.

Namaste and Glorious Blessings to All,

“We want the world to know that breast cancer is not a pink ribbon—it is traumatic, it is life-changing, and it urgently needs a cure,” wrote Scorchy Barrington in a special announcement on the Change.org petition she started and which was the force behind Facebook’s updated policy. Barrington (who uses a pseudonym) is a breast cancer survivor who has felt personally empowered by stark images of mastectomy scars. She felt compelled to start the petition after learning that Facebook had removed several of them and banned SCAR Project photographer David Jay for 30 days.

Another woman whose mastectomy photo has appeared on Facebook, Inga Duncan Thornell, toldYahoo! Shine, “Technically, yes, these are not breasts, so as far as censorship goes, this is [a victory].”

Duncan Thornell, a personal coach, hypnotherapist and blogger in Seattle, opted to have a prophylactic, or preventative, double mastectomy in 1993, then covered her scars by getting an elaborate chest tattoo a year later. A photo of the tattoo took on a life of its own recently; it went viral after finding its way onto social media sites including Facebook, and was reportedly removed by administrators—though Duncan-Thornell, who never posted the photo herself, is unsure of whether it was ever actually removed. Nevertheless, the image has become a symbol of the cause.

Though she writes on her blog that “I fully admit I really didn’t have any opinion on whether Facebook should or should not allow pictures like mine to be broadcast all over their site,” she told Shine, “I think it shows a lot about them that they got pressured like that,” and that the photos are “a neat thing to have out there.”

But, she added, if these photos are going to be permitted, than images of breastfeeding certainly should, too. “In the bigger scheme of things, what’s beautiful and what’s natural is breastfeeding—versus what’s existential and scary,” she said. “It’s a whole different can of worms.”

Facebook does have an official policy allowing “the vast majority” of breastfeeding photos, because “we agree that breastfeeding is natural and beautiful and we’re glad to know that it’s important for mothers to share their experiences with others on Facebook.” Still, the policy is a bit murky because, it continues, “Photos that show a fully exposed breast where the child is not actively engaged in nursing do violate the Facebook Terms.” A Facebook page called “Hey Facebook, Breastfeeding Is Not Obscene” regularly takes the site to task on the issue.

For her part, Duncan-Thornell, whose mother died of breast cancer in 2010, says she has come to understand the value of showing the reality of the disease. “I had assumed when I had [themastectomy] done that it would be a private thing that no one would know about but me, my surgeon and my husband,” she said. “But it wound up coming up all the time,” no matter where she was, as other women would bring up the issue of breast cancer and she would inevitably wind up trotting off to a bathroom to share her scars as part of the intense conversation. Further, having the photo of her chest all over the Internet has taken some time to get used to.

“Initially it was kind of a shock,” she said. “My dad saw it, my stepsisters saw it. I’d go out to lunch with someone who would say, ‘Hey, I saw your tattoo!’” Now, she added, speaking out about her experience has become par for the course.

“As a writer, I have learned that a picture is not worth a thousand words. Words are an important part of everything,” she said. As far as her decision to have a mastectomy all those years ago, she added, “I’m happy to be alive. I’ve lost my mom and I’ve lost a lot of other people along the way. But I’m here, and I’m quite comfortable.” 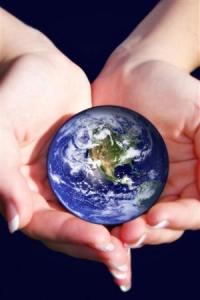 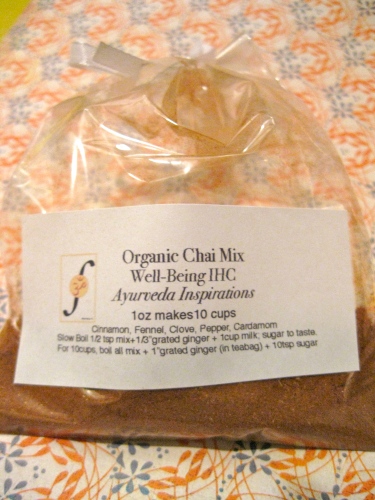 Organic Chai Mix is Back! Each month Veda Health donates 10% of the proceeds to a different Charity. Come share a Healthy Cup of Chai Today!